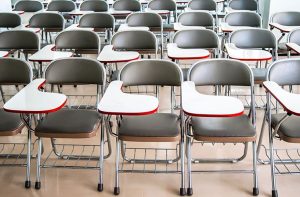 One of the unintended consequences of the proliferation of charter schools is that, unlike public school districts, they can easily go bankrupt or lose their charter and close. While such closures are painful for all the enrolled students and their families, already vulnerable students with educational disabilities are especially exposed. Not only must they often find an alternative placement on short notice, but there will frequently be a lag in provision of services at their new school. Because these closures are rarely telegraphed in advance, timing often renders the option of other charter schools or special admission public schools unavailable.

Another consequence of such closings is the complicating of avenues for challenging decisions of those school that continue to dog special needs students.  If a charter school makes an agreement with a parent, then disappears, what is the parent to do? If a charter school fails to identify or inadequately identifies a child’s disability, or owes a child compensatory education for services not provided, how does a parent pursue the traditional administrative processes for relief? And how do parents without resources get a lawyer to help them?

S.V-W. attended the Walter D. Palmer Leadership Learning Partners Charter School (Palmer) from 2007 until the school became insolvent and closed in December 2014, in the middle of the school year. His mother sought the advice of an attorney because S.V-W. had been struggling at Palmer and had not received special education services. That attorney, Daniel Cooper, concluded that Palmer had violated the “child find” provisions of the Individuals with Disabilities in Education Act (IDEA), which require publicly funded schools to identify and program for all children with disabilities in need of special education.((20 U.S.C. § 1412(a)(3)(A).))

Ordinarily, Dan would have reached out to the school and attempted to resolve the dispute, and if that didn’t work out, he would have filed a complaint seeking an administrative “due process” hearing to resolve the issues. But in this case, Palmer was closed and insolvent. So, in addition to filing a due process complaint against Palmer, Dan also filed a due process complaint against the Pennsylvania Department of Education (PDE). Under the IDEA, PDE bears responsibility for providing special education and related services when a school cannot or will not do so.((20 U.S.C. § 1413(g).))

But instead of stepping in and agreeing to provide compensatory education for services the child had been denied, PDE took the position that it should not be a party to the administrative proceedings. PDE further stated that it intended to provide compensatory services only if the hearing officer determined they were due. Based upon this representation, the special education hearing officer dismissed the PDE from the administrative process.

This left Dan to engage in the process of fully litigating the claims on behalf of S.V-W., with no one across the table. So he did his research, gathered documents, prepared witnesses, and presented evidence at a two hour due process hearing. Several weeks later the hearing officer issued his decision, finding that Palmer had failed to comply with its obligations to this child, resulting in a denial of a free appropriate public education (FAPE). The hearing officer concluded that S.V-W. was entitled to a full day of compensatory education equal to every school day for two years. At that point, the PDE agreed to honor the decision and provide the compensatory services. What PDE would not do, however, is honor the IDEA’s attorney’s fees provision.((The IDEA provides that a district court may, in its discretion, award “reasonable attorneys’ fees” to the parents of a child with a disability who is a “prevailing party.” 20 U.S.C. §1415(i)(3)(B)(i)(I).))

The IDEA, like other civil rights laws, contains an attorney’s fees provision to insure that the courthouse doors are not closed to those being denied their rights and the protections of the law, just because they cannot afford to hire an attorney. Under those provisions, persons, like S.V-W.’s mother, who prevail on their claims, are entitled to have the other side pay their reasonable attorney’s fees. But by getting itself dismissed from the administrative action, even though it forced the action to proceed to conclusion before PDE would fulfill its obligation to provide the services Palmer had denied, PDE was able to claim it was not a party and therefore was not obligated to pay for the work it had caused Dan Cooper to perform in putting on a hearing.

The parameters of PDE’s role when charter schools close is a recently evolving issue. Because of the large number of charter schools in the Philadelphia area, there have recently been three other such cases, involving different or limited factual circumstances.((Attorney David Berney, who has also been litigating issues relating to PDE obligations when charter schools close, is to be complimented on his own success in the district court.)) The PDE has made clear that it intends to vigorously contest these cases and seek adjudication of these issues in the Court of Appeals.

The decision in this case represents the broadest and clearest statement that PDE stands in the shoes of defunct charter schools when it comes to the rights and remedies of students with disabilities, including payment of attorney’s fees to prevailing parents. Popper & Yatvin is pleased to have helped add to the body of the law on this subject, and will continue to empower parents by assuring their access to the resources needed to defend the rights of their children with disabilities.