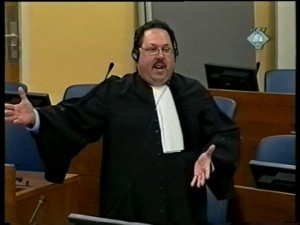 Today I am off to The Hague, The Netherlands, for the Annual Training and General Assembly of the Association of Defence Counsel Practising before the International Criminal Tribunal for the Former Yugoslavia (ADC-ICTY) on 30 November and 1 December (using European date formats is part of the travel prep).  Topics include:  Best Practices of Defence Counsel – A View from the Bench, Ethical Considerations for Defence Counsel, The Residual Mechanism, and Review of Appeal Judgements. This will likely be the last meeting of the ADC-ICTY in this precise form, as the Yugoslavia Tribunal (ICTY) in it’s current form will cease to exist in July of 2013.  At that point the Mechanism for International Criminal Tribunals (MICT), also known as the Residual Mechanism, will take over certain functions of the ICTY.  The MICT, created by the U.N. in late 2010, has already assumed some of the functions of the Internattional Criminal Tribunal for Rwanda (ICTR) effective July 2012. The MICT will be responsible for new cases, including contempt proceedings, re-trials, new appeals, post-judgment matters, incarceration and release decisions, and certain other functions previously performed by the tribunals.  Until the completion of pending trials and appeals, the existing tribunals will exist in tandem with the MICT.
Under Rule 42(A)(iii) of the Rules of Procedure and Evidence for the Mechanism for International Criminal Tribunals, the judges have adopted the requirement that all counsel appearing before the Residual Mechanism be a member of an association which is recognised by the Registrar. The Registrar has requested that an association of counsel be established for the Residual Mechanism.  To this end, the ADC-ICTY has convened a working committee to consider proposals.  Any plan needs to address both the needs of the MICT as well as the ongoing ICTY obligations.
The biggest hurdle will be making the Registrar and the MICT President understand, that because of the lowered volume of work for defense counsel, both in number of counsel and amount per counsel, that the MICT must expect to contribute to the funding of such an association. There simply will not be enough members able or willing to contribute sufficient funds to support even a minimal infrastructure for such an association, without MICT financial support. Having decided that such an association is of value to the MICT and having memorialized that need in the rules, the MICT must also expect to shoulder some of the cost of insuring that such association is a legitimate, at least minimally functioning entity. As the MICT obviously realized, an ADC serves the MICT by providing additional/complimentary applicant screening, an organized point of communication with defense counsel, self-policing and disciplinary mechanisms, management of essential MICT resources allocated to the defense, professional education, coordination and training of interns, and many other tasks essential to the operation of even a scaled down institution like the MICT.