Haddonfield and Atlantic City NJ and Philadelphia Pa – November 11, 2020 – The partners at WGP are proud to announce that Rocco DePersia Esq. has joined Greenblatt, Pierce, Funt and Flores, LLC (WGP) in an “Of Counsel” capacity for the firm. He will continue to concentrate his focus on Plaintiff’s Personal Injury, DWI/DUI and Municipal Court work. 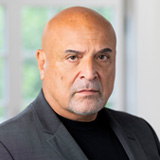 One of the most recognizable figures in the South Jersey legal community, Mr. DePersia brings his 40 years of significant and successful trial experience to WGP. Among his achievements, he is a former president of the Camden County Bar Association and a former chairman of the New Jersey Supreme Court District IV Ethics Committee which was responsible for handling complaints regarding attorney ethics in Camden and Gloucester Counties. “I really feel the time is right for me to bring my practice to WGP. As many of my clients have been with me for years, I wanted to be with a firm that could properly service and support them; and, I believe WGP has the personnel and resources to do just that. In addition, Len Baker and I were partners for over 15 years in the long-standing firm of Mitnick, Josselson, DePersia and Baker; and, it is certainly great to be working with him again,” said Mr. DePersia. WGP’s managing partner, Ronald Greenblatt, said, “It is really an honor that Rocco has chosen to merge his practice with ours. I have long admired both his legal ability and the way he deals with people. He is not just an amazing lawyer, but he is an amazing person. We have worked on cases together for years, and to now work with him on an everyday basis is really a special moment for everyone at the firm.” Mr. DePersia, a native of Camden, New Jersey, is also a true renaissance man. He was a producer, writer, and the former lead singer and co-leader of Latin Soul recording artist, CINTRON. He has also arranged, produced, and promoted hundreds of concerts and dances throughout the Philadelphia/South Jersey area; and, he opened, owned, and operated Camden’s iconic Nice Little Bar. In addition, he advised and managed numerous professional boxers culminating in 1995 when one of his fighters, Bruce Seldon, became the WBA Heavyweight Champion of the World. He has also provided both soundtrack contribution and a recurring acting role to the current Amazon TV Crime Drama, Chase Street. A father of two successful daughters, Mr. DePersia lives in Voorhees, New Jersey with his wife, Lydia. Founded in 1996 as an aggressive criminal defense law practice, Greenblatt, Pierce, Funt and Flores, LLC has grown into a full-service law firm offering individuals assistance in virtually all areas of criminal, employment, personal injury, civil rights, and family law. The firm has three offices in Pennsylvania and New Jersey. Visit gpffstaging.wpengine.com for more information.